West Nile virus is the most pervasive threat in California. The virus is always present in the environment as it cycles between mosquitoes and a wide variety of bird species. In other words, WNV is endemic to where we live.

West Nile affects humans and other animals, but do not become contagious. Only mosquitoes can carry and spread West Nile virus.

How is the virus spread locally to humans?

The southern house mosquito (Culex quinquefasciatus) is the region's most common vector of West Nile virus. Only certain species of mosquitoes can transmit the virus (a Flavivirus). There is no evidence that the Aedes mosquitoes in L.A. County can spread West Nile virus.

Female mosquitoes pick up the virus when they feed on infected birds. The virus penetrates the mosquito’s gut where it replicates and moves into the salivary glands. It is during subsequent blood-feeding by infected female mosquitoes that transmission of the virus can occur.

What are the symptoms of West Nile virus?

Primary care physicians are usually the professionals who order West Nile virus tests for their patients. Four out of five people will not show symptoms.

There is no cure and no vaccine for people. There is a vaccine available for horses.

Who is at risk?

Everyone in Los Angeles County is at risk of West Nile virus infection, but people over 50 and those with existing health conditions are most at risk of serious illness and long-term health problems.

How can I protect myself from getting this virus?

No human vaccine exists for West Nile virus. The best prevention is to wear insect repellent applied directly to all exposed skin. Repellents should contain one of the following active ingredients:

Reduce the mosquito bites by removing stagnant water around the home and eliminating containers that might catch and hold water (even a bottle cap).

How did West Nile virus get here?

West Nile virus was first recognized in the West Nile District of Uganda in 1937. It first appeared in the United States in New York in 1999 – most likely carried by an infected stowaway mosquito in a plane or cargo ship. Within four years the virus had swept across the country with the seasonal movement of infected birds and arrived in the Los Angeles area in late 2003.

Human cases occur in Los Angeles every year. West Nile virus is now a permanent part of the ecology of local bird and mosquito populations and will never go away.

Chikungunya virus is transmitted to people by two species of mosquitoes, Aedes aegypti and Aedes albopictus (also known as invasive Aedes). Both species are found in Los Angeles County.

Dengue virus (DENV) is a mosquito-borne virus that can cause mild to severe acute febrile illness in humans. It is now endemic year round in most countries in the tropics and sub tropics. Dengue fever can progress to dengue hemorrhagic fever (DHF) and dengue shock syndrome (DSS), which are potentially life-threatening. Cases of dengue fever often experience a sudden onset of fever greater than 101…

Our agency reports data related to mosquitoes. Human cases are reported by the L.A. County Department of Public Health and Pasadena Health Department. 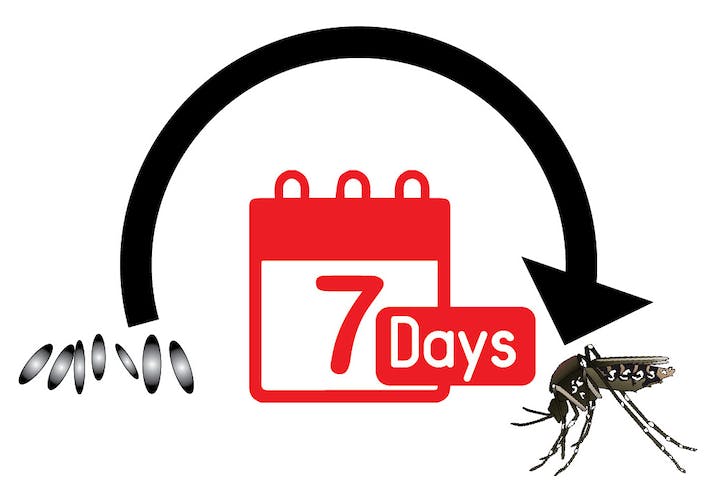 There may be two reasons why you keep seeing mosquitoes in your yard or patio: production and resting sites.