Join the Fight For One Less Bite

Mosquito control staff uses many tools to reduce mosquito-borne disease threats, but they can't do it alone. Mosquito control also needs your help to keep your home bite-free. Join the fight for one less bite by:

Sterile Insect Technique or Techniques (SIT) is one tool used by mosquito control to reduce insects that can spread diseases, including some types of mosquitoes. The technology has been used since the 1950s, but in the United States, SIT for mosquito control is relatively new.

The San Gabriel Valley Mosquito & Vector Control District supports the evaluation and research of SIT. Federal and State regulatory agencies will determine the safety of innovative approaches in California. Our agency may evaluate the use of these technologies only after they have been approved.

Currently, no mosquitoes are being released using SIT in San Gabriel Valley.

How does it work?

SIT targets specific types or species of mosquitoes (such as Aedes aegypti or Aedes albopictus). Generally, SITs for mosquitoes involve three steps: mass production of mosquitoes, sorting males from females, then mass release of male mosquitoes into an area. These steps may differ depending on the type of SIT.

To be successful, the male SIT mosquitoes released into an area must largely outnumber wild male mosquitoes. Once released, male mosquitoes mate with wild females, and because of sterility, no offspring are produced. Over time, the numbers of the targeted mosquito species in the area are reduced.

SIT mosquitoes cannot reproduce in the wild. Therefore, once SIT male mosquitoes stop being released into an area, the specific species of mosquito being targeted will, over time, return to normal.

Male mosquitoes do not bite people or animals. They feed on nectar. Therefore, people living in the release area will not be bitten more than usual.

SITs for mosquito control can be used as part of an integrated vector management approach. SIT may be a preferred way to reduce numbers of mosquitoes in areas where use of insecticides is not possible, not supported by a community, or where insecticide-resistance has reduced the effectiveness of insecticides.

There are three major types of techniques that can have a sterilizing effect on specific mosquito species.

The San Gabriel Valley Mosquito & Vector Control District supports the evaluation and research of SIT. Federal and State regulatory agencies will determine the safety of innovative approaches in California. Our agency may evaluate the use of these technologies only after they have been approved. 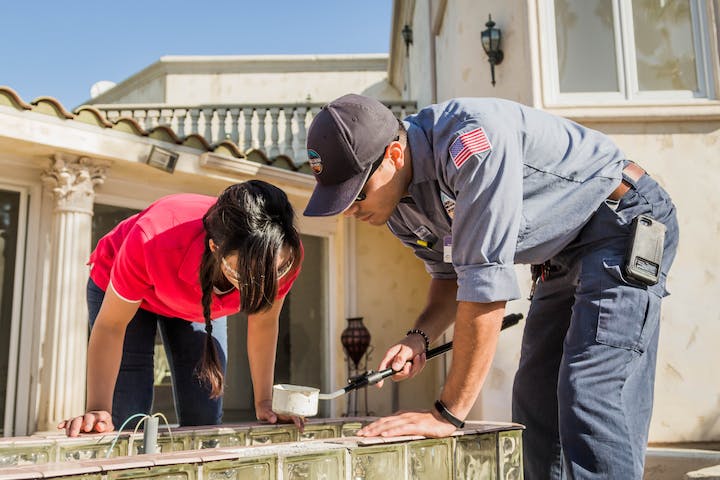 Pesticides to kill adult mosquitoes is a tool. But in the cities, mosquito control rarely use it. Why is that?

San Gabriel Valley MVCD is fully committed to providing accessible facilities, elements and channels of communication to all members of the public. As part of this commitment, San Gabriel Valley MVCD has a policy of providing an accessible website compatible with the Web Content Accessibility Guidelines (WCAG 2.1) and commercial screen reading software. All features of the website are coded to allow individuals with vision and other impairments to understand and use the website to the same degree as someone without disabilities. We welcome feedback and can often resolve issues in a timely manner if they arise.

If you need any special assistance or accommodations

In addition to testing with users with a wide range of disabilities and coding our website to WCAG standards, San Gabriel Valley MVCD regularly scans its website to ensure ongoing compliance, and makes timely changes to any inaccessible changes, if any are found. In our ongoing commitment to transparency, we make the last three months' reports available to the public.

Please note that this site may link out to third-party websites, such as state or federal agencies, that do not have accessible content. This site may also include documents provided by third parties included in our agenda packets, for example. While we cannot control the accessibility of content provided by third parties, we are happy to assist any member of the public with reading and accessing content on our site.

See an opportunity for us to improve? Please contact our accessibility officer or call us at (626) 814-9466.

We are committed to your ability to access all content, and we will respond to all requests as soon as possible.

Thank you for reporting this accessibility issue. We'll be in touch soon.
There was an error saving your report. Please make sure you have entered all required fields and try again.
This site is protected by hCaptcha and its Privacy Policy and Terms of Service apply.